January 23, 2016March 15, 2019 ~ Efrat Arielle ~ Leave a comment
This will be one of those posts I am a bit concerned having here on my blog because my parents can access it.
They will not be happy to read about my visits to Palestine, they will be very worried.
But I am going to have it here anyway because I feel that my experience in the West Bank is vitally important to my understanding of this land and my relationship with it. Not to mention the fact that it is awfully bizarre to me that I spent most of my life around here and never really noticed the West Bank. Never really seen the People of Palestine, their cities, their love for this land, and how they were sharing it with me all along.
We always lived so tightly side by side, it’s astonishing, and the way I see it, we always will. Even when we die, or go somewhere far away in the world…The Land follows.  Somehow, most people around here keep denying this basic reality.
Sometimes I blame my past ignorance on my young age back then when most of what I cared about was surviving school with a few good friends to laugh about it.
But I know that there is much more to it. It worked well for the educational system I was raised in, it worked well for me and the people I loved, it allowed life to go smoothly the way I thought other kids around the world live. And truly, I had the kind of childhood you go back to in your memories to treasure.
Nonetheless, the shadows of war were always around, and they planted those everlasting fears of the unknown in my young brain. Which was already full of such devils ever since I could remember myself, even before I remember myself as Jewish.

My kids will be raised differently. Inshallah.

Caution is mostly good though,  only naïve idiots (which is what I am sometimes) forget this and let themselves be swapped by John Lennon. I probably wouldn’t want my kids to go to Jericho either, especially not at the current escalating situation.

After walking around Jericho though, I think that my personal caution comes from being a woman rather than being an Israeli or a Jew. I get nervous when strange men stare at me. It’s a familiar feeling everywhere. In some places more than others.
I guess knowing I am in a place where “I am not supposed to be” just makes it a bit more solemn. 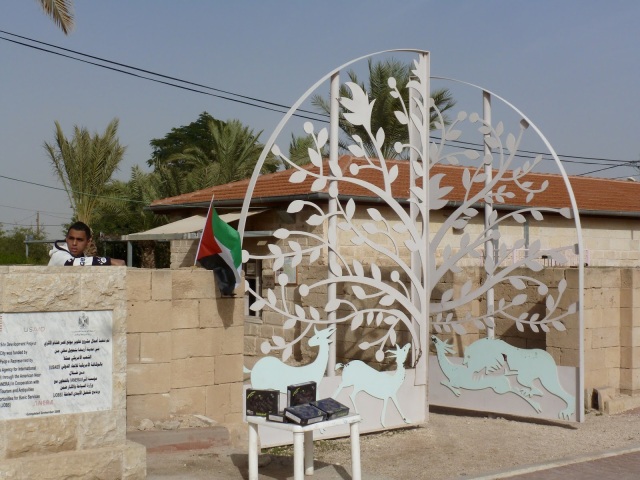 I visited Jericho with a group of Israelis, most of them young artists who don’t mind ignoring the law in order to see things for themselves. This was different because my(very few) past visits to the West Bank were with foreigners, mostly Americans. So I could easily just mingle in while trying to ignore my Israeli-nervousness about what I was doing and where I was.
This time, I was part of a group of curious Hebrew speakers, wanting to know more about their neighbors. Some of us were more experienced in this business than others and totally relaxed about it.  But I think that when we passed the GIGANTIC red sign marking the entrance to area A, and to a “Dangerous to your Lives” area for Israelis, we all exhaled a deep breath we were holding.
Our tour guide, an impressive guy from Jericho with an amazing life story, spoke to us in fluent Hebrew while we were outside of area A. He told us that because we do not have permits (among other reasons) we will speak English in Jericho. He also joked with us about coming up with a lie identity to answer the question “Where are you from”.
We looked at each other, observing our mostly dark hairs, dark eyes, and curls. Someone said: “Italy always works!”. Everyone laughed.
But really, our guide was awesome. He made sure we were relaxed and cool. He was also so knowledgeable about everything!

We started the tour at kasr el yahud (Not in Jericho), I’ve never seen Jordan so.. right there. Not have I seen the flags of Palestine, Jordan AND Israel so close together at any other place. The border is on a very narrow part of the Jordan river, so there were Jordanian policemen standing on the other side, looking at us.

Can’t the water and the rocks just be? you know, like the earth as a whole used to be before humans became stupid.
Then we moved straight to Hisham’s Palace, to see some archeological wonders.

The people living here had a fancy lifestyle. The place had a high standard bathhouse,  mosaics, and a water system.
This is an Islamic historical site. King Solomon was never here.

The mosaics had some motifs we were familiar with from Judaism though.

Such as this Tree of Life masterpiece. 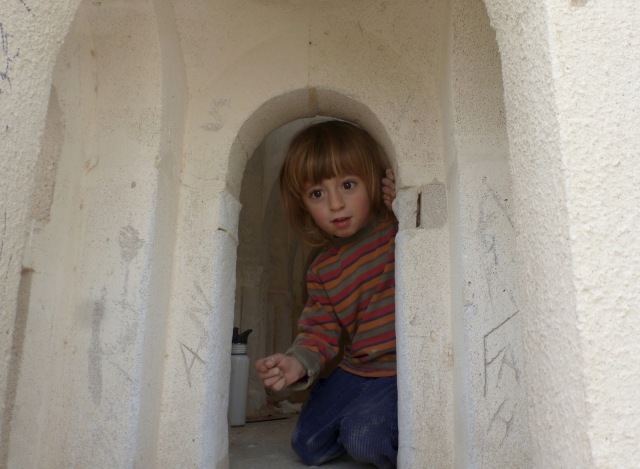 This little cutie was so excited he was screaming in baby Hebrew from time to time, and it made me a bit nervous.

Two of my fellow visitors pretending to be tourists who never heard about the exotic Falafel. Their accent, and especially the way they said “Hummus”, really didn’t help the deal. But they carried it for a very long time.

Hebrew signs in area A.

The Palestinian flag welcomed us everywhere. Which made me realize I am not used to seeing it so often lol. Here and there I noticed some signs of “Free Falestine” in Arabic. With a drawing of the land, all of it of course, and a rifle, fist or another aggressive item next to it that looked painful. It scared me.

What does Free Falestine mean? What is it about it that scares me? Can it not scare me? I pondered over this. I still am.

A beautiful piece of nature 🙂 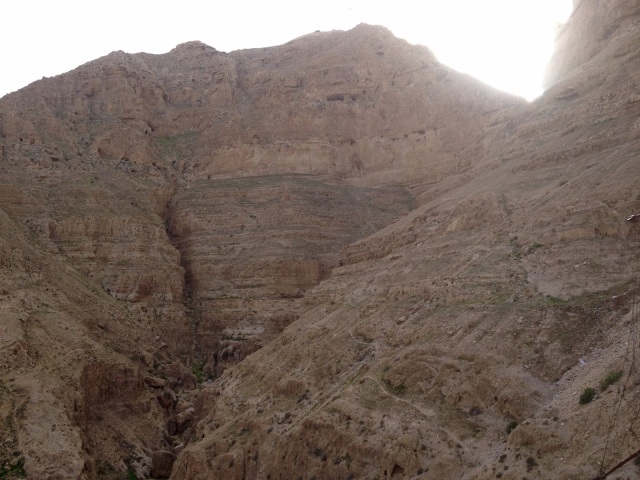 As we climbed up this mountain our guide greeted “Salam Alaikum” ten different people who went down the mountain. They all knew we were a bunch of Israelis, I’m absolutely sure

Photos only this time 🙂 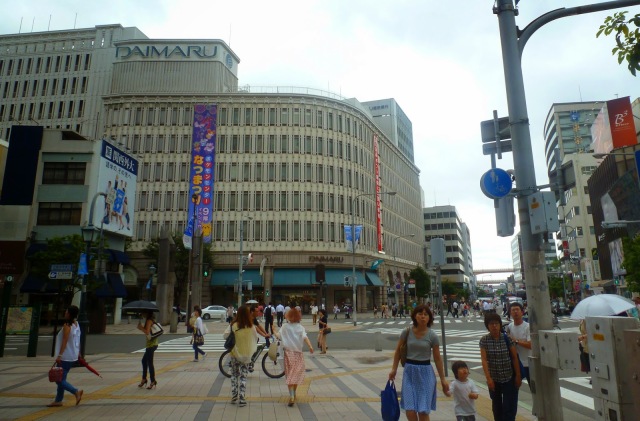 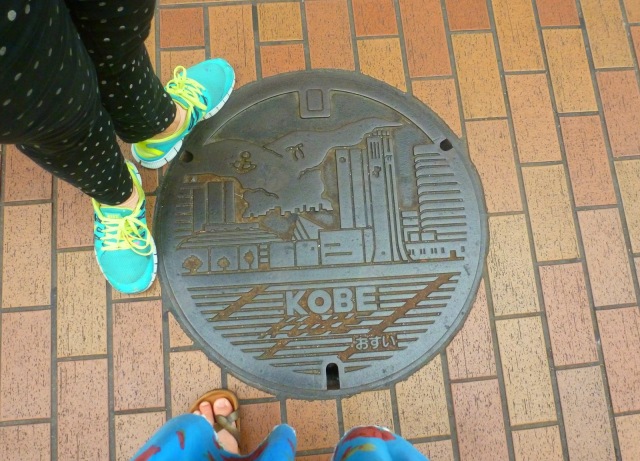 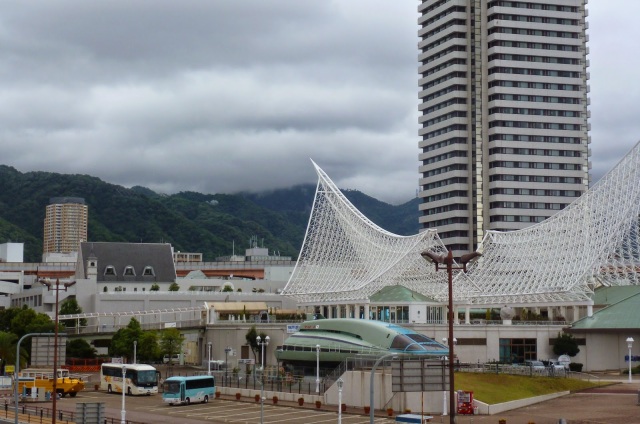 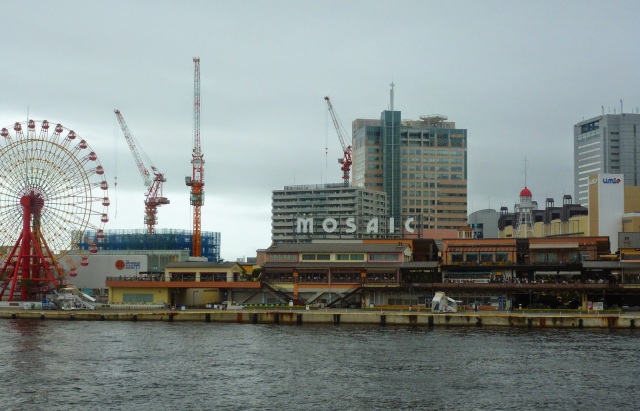 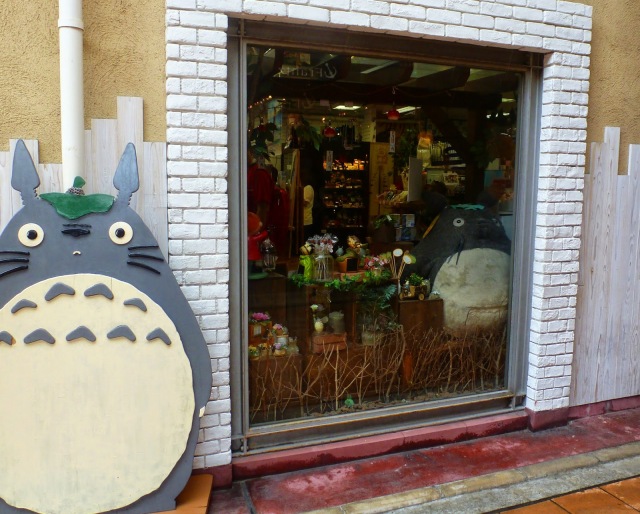 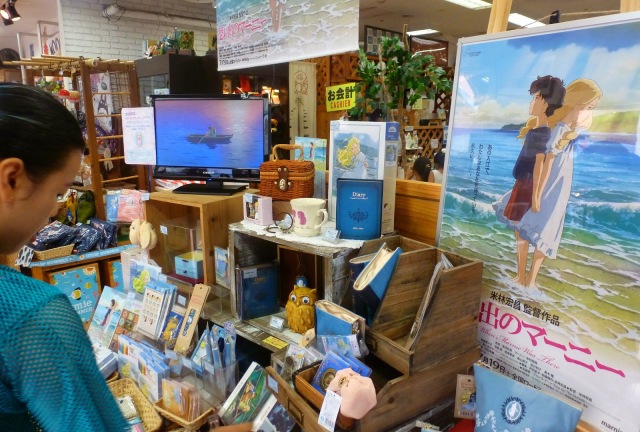 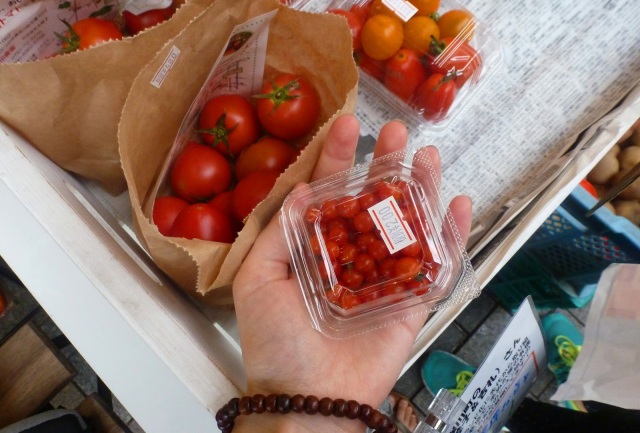 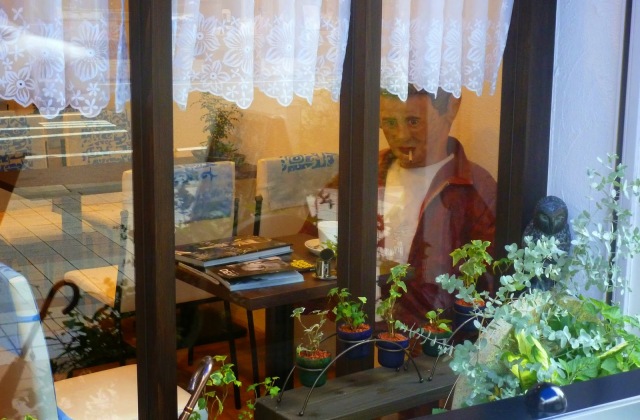 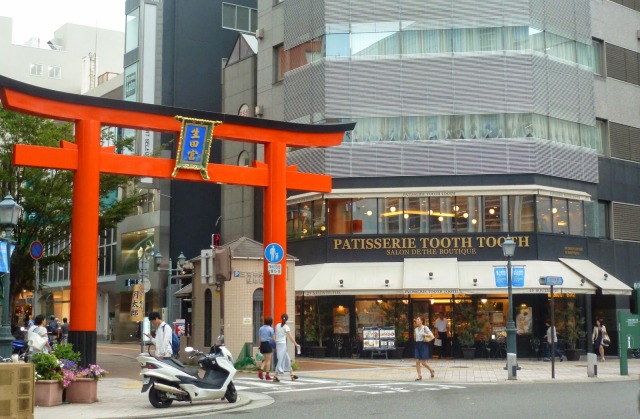 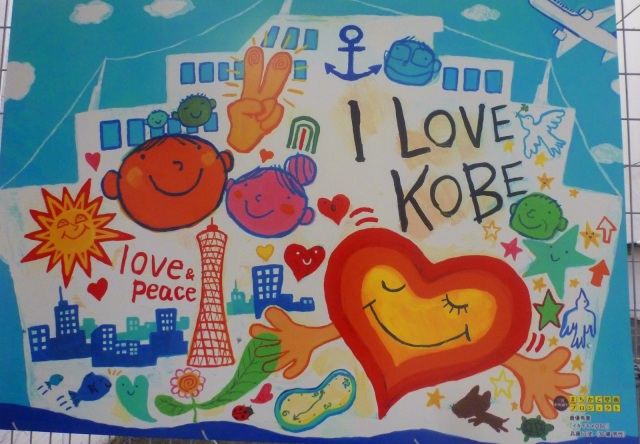 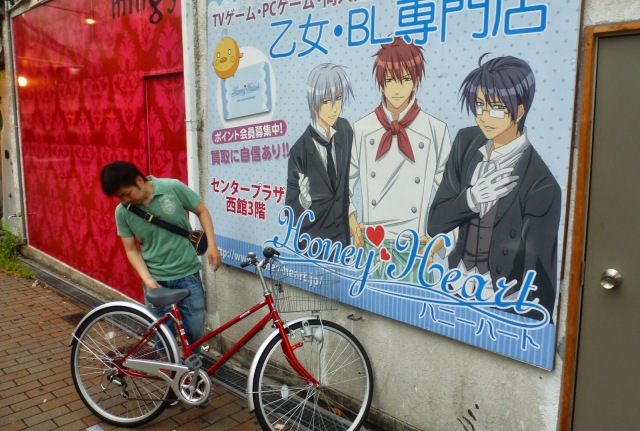 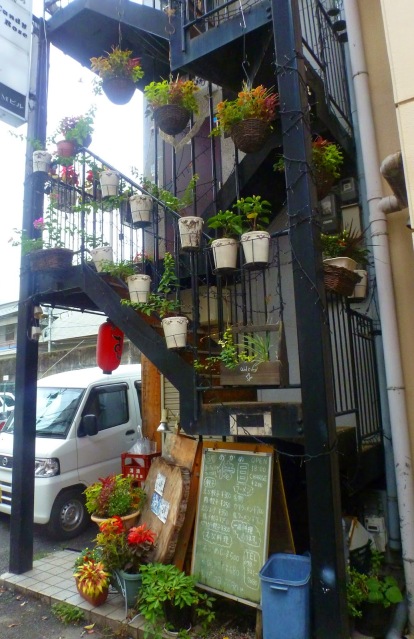 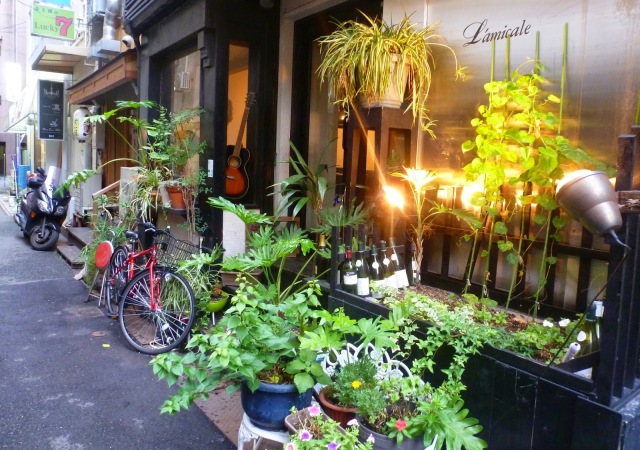 My four days at Kobe were packed with events.  My friend Ruby and I stayed together at an apartment up the mountain with three more guys: our host, a university student and a tourist. all very nice. it felt homie even though we had such a short stay. Probably more than my dorm room in Kyoto felt in four months.

Each day we explored a very different part of the area.  I will start with the last: a long long fun fun hiking day we took outside of the city, at mount Rokkosan.

part of Kobe from above 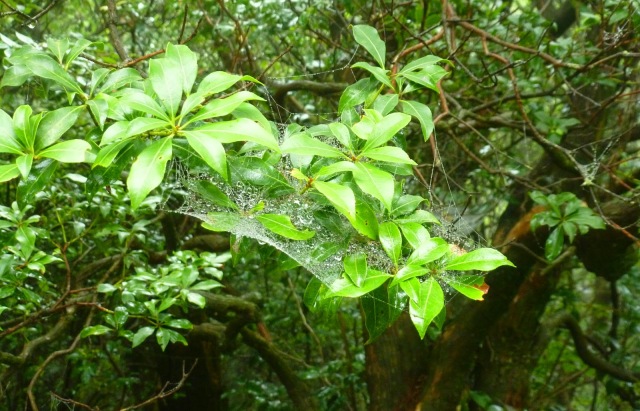 Houses in the mountain(and mist)

Ruby next to the Arima Toy Museum

Arima is one long street in between the mountains. We went there looking for an onsen to soak in, and found this free feet hot(super hot) springs. great after the hike! 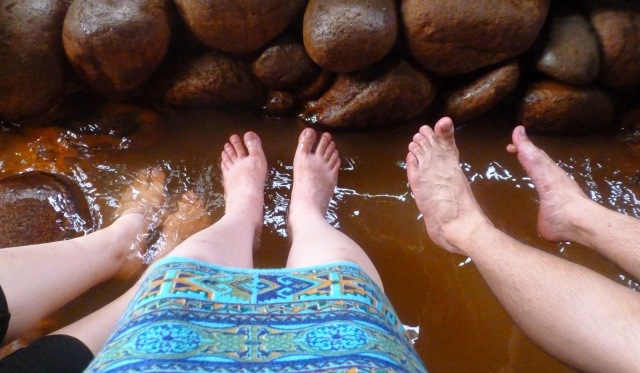 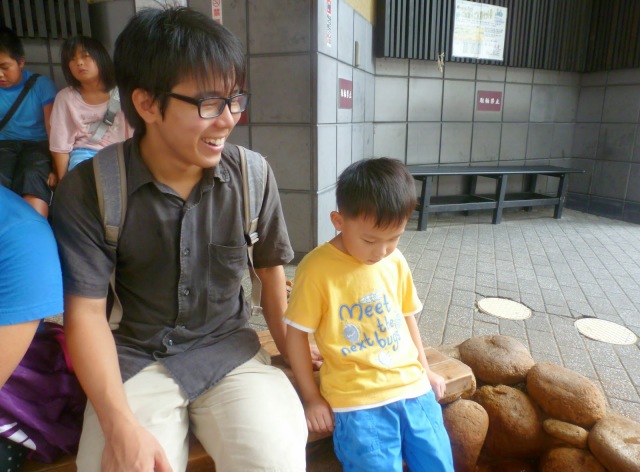 This cute little boy sat very quietly close to us for a while. We tried to say hello and ask him for his name, in Japanese. Then his dad came by and told us that he doesn’t understand because they are Chinese. 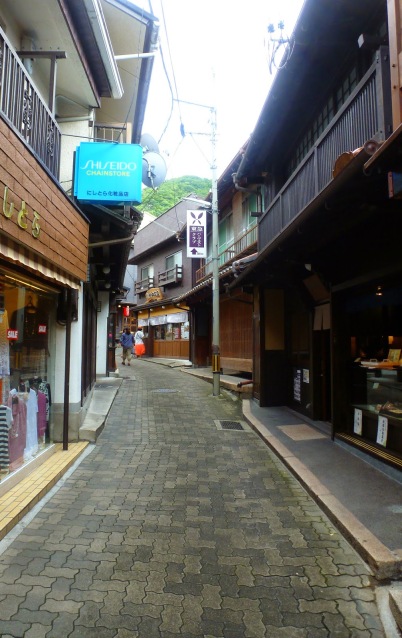 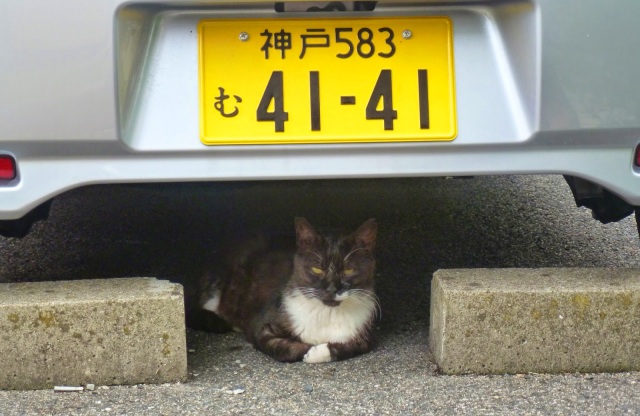